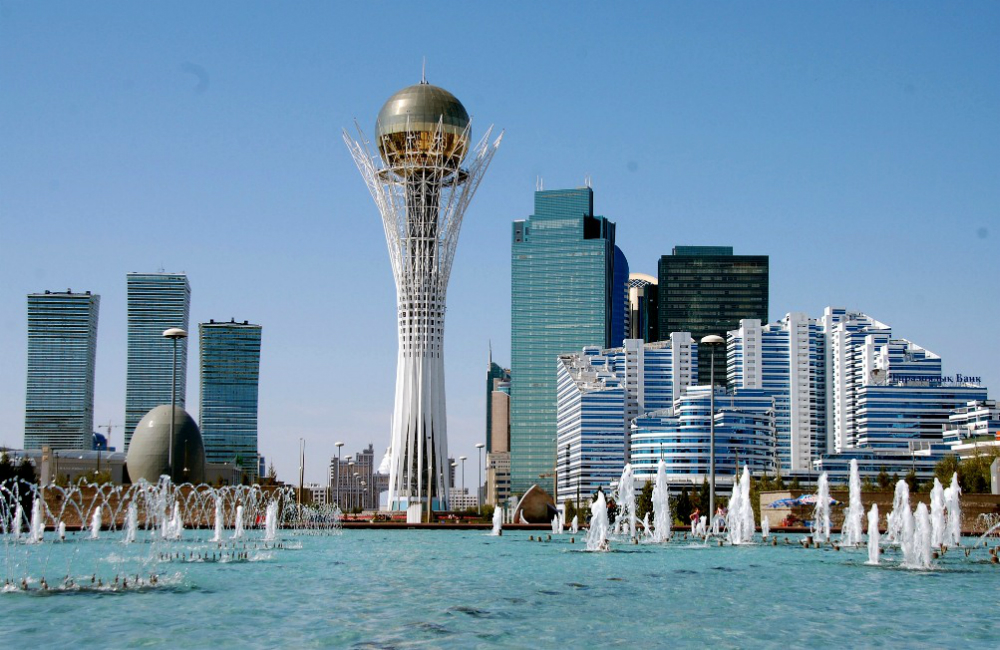 In Astana, investors from the UAE to 2014 is being constructed the highest in Kazakhstan and Central Asia, one of the highest in the CIS 88-storey 320-meter skyscraper housing and hotel and business complex "Abu Dhabi Plaza".   Astana is situated in central Kazakhstan on the Ishim River in a very flat, semi-arid steppe region which covers most of the country's territory.

Baiterek observation tower, the “Tree of Life” is a 97-methre-high building crowned by a golden glittering globe. According to legend, the magic bird Samruk would lay a golden egg on the top of every tree that was out of reach to humans. All the secrets of human desire and passion were hidden inside the egg, as well as the answers to all their dreams for the future.

A 40-metre height symbolizes the age of Mohammed when he first had revelations from God, and whose gleaming, 63-metre-high minarets symbolize the Prophet’s age when he departed from the world of man. One of the rarities in the Mosque is President’s gift: part of Kiswah - a stone of Ka'aba from Mecca and holy Koran, published in Saudi Arabia.; The biggest mosque in the Central Asian Region for 12,000 parish; 4 prayer-towers of 60m height; Height of the main dome: 40m; Prayer’s room for 5,000 parish.

In the capital of the Republic of Kzakhstan situated Khan Shatyr Entertainment Center. This is the world’s largest tectonic bivy. This “bivy” is made of pellucid material and balanced on a network of cables strung from a central spire one hundred fifty meters high. Underneath this bivvy, an area larger than ten football arenas is an urban-scale internal park, shopping and entertainment venue with squares and cobbled streets, a boating river, shopping centre, mini golf and indoor beach resort. The structure has a two hundred meter egg-shaped base enclosing an area of hundred forty thousand m^2

Closer to the river is another grand dome supported by pillars. This is the Saltanat Reception Palace, where state and other official reception and banquets are held. Nearby is the Atameken Ethnic Memorial Park, which features a 1.7- hectare model of Kazakhstan, highlighting many architectural and other interesting sites around the country

Aksu-Zhabagly is the oldest and most famous nature reserve in Central Asia. The name was given to the reserve from the names of two rivers (Aksu and Zhabagly)in the upper reaches of which was formed this mighty mountain site, the ridge of the West Tien-Shan, with a height of up to 4000 m above sea level. Reserve extended for a 740 sq. km, the protected area there is a unique canyon of the river Aksu. The main rivers of the reserve - Dzhabagly, Aksu, Baldabrek, Ball-Baldabrek are in the Western direction. Most river valleys at the exit from the mountains have a shape of the canyon. Especially notable is the canyon R. Aksu whose depth reaches 400 meters, length - more than 20 km of Aksu-Dzhabagly
Nature reserve is notable for a number of picturesque landscapes and unique natural features.
Birds of the reserve are represented 239 species of birds, half of the whole avifauna of Kazakhstan. From the total list on the territory of Aksu-Zhabagly breeds order 123 species of birds and 38 species and never leave its territory. The site is marked by many red predators: Saker Falcon, lammergeier, Golden eagle, short-toed eagle, peregrine Falcon, the Egyptian vulture and the eagle-dwarf. Great interest among visitors and employees of the reserve causes the most beautiful bird of Paradise Flycatcher.
It so happened that on the territory of Aksu-Zhabagly happened unique paleontological discovery: in places of Karabastau and Akbastau (mountainsides of Karatau) found the rarest prints of all kinds of fish, shellfish, and skull Jurassic period. These organisms are inhabited the sea basin flood the area of approximately 120 million years ago. All human activities on the territory of the reserve are strictly regulated. The reserve is organized twelve posts surveillance approaches to its borders. However, this is not a ban, but only control. Tourists are allowed to enter the protected area by car and much more is permitted if it is in the framework of local rules of careful treatment of nature.
Left traces of their activities and our ancestors. In the pit Kaskabulak ravine - paintings and harsh place, surrounded by a huge amphitheatre of dazzling diamond-shaped snow and dark rocks, is the famous stone gallery. On flat stones, covered with black iron-manganese crusts, well seen drawings of ancient people, cut with a sharp instrument. Fanciful ligature stone painting amazes with the variety of subjects and techniques. Most researchers relate them to Saki period, i.e. to V-IV centuries BC. Others believe that "art gallery" Kaskabulak was created by many generations, from the Stone Age to the middle ages BC.