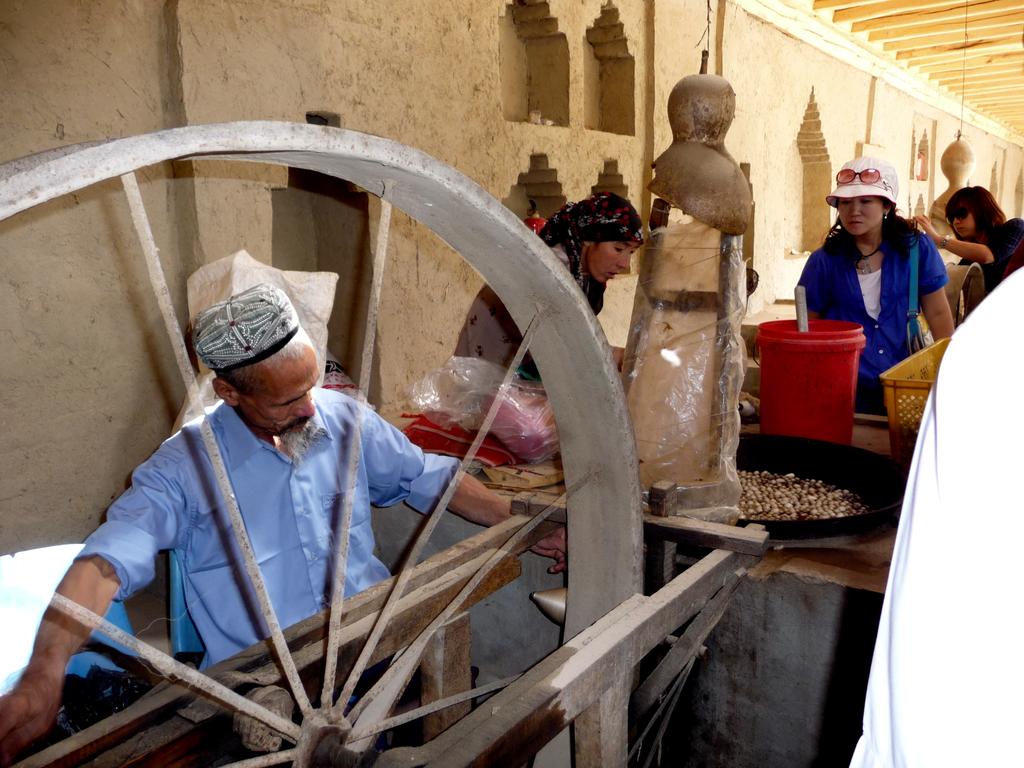 Among endless sands of the Taklamakan desert on the south-east of Xinjiang region in China and to the north from Western Tibet situated the oasis where situated Hotan city – “birthplace of carpets” or “storehouse of nephritis”.

The city is placed in the north-western part of China on the place of Karakash and Yurunkash rivers’ confluence and on the south of Xinjiang. This city is political, economic and cultural center of Xinjiang. The climate is so dry, that these rivers are dry up for period from spring till autumn. The Taklamakan desert is situated to the north from the city and there is also Kunlun Mountain which also influences on microclimate of the region.

Hotan was the largest transit point on caravan road and also it was a center of silk production. One of the first people, who inhabited oasis, was Scythian tribes which were living there in 1-st millennium BC. A lot of ethnic groups of Central Asia were also living here such as Tokhars and Sogdian people. Because of them there were started active trade processes on the Great Silk Road. Even the prominent traveler Marco Polo visited Hotan during his trip in 1274. According to the standards the modern Hotan is provincial city. It has population about 114 thousand people, where the most of them are Uygur people. There are no large factories and plants or other big industrial enterprises. One of the most important treasures of Hotan is – jade. During almost two thousand years it was the main provider of jade. The jade is obtained in its surrounding areas and local people create gorgeous and beautiful masterfully made manufactures of applied art from this wonderful stone.

There is a custom among locals of preserving and passing a thing made of jade from one generation to another. Besides most of such things is more than one thousand years. Close to Hotan city situated one sightseeing place of the city called “Mazatakh” mountain or “Mountain of graveyards”; it is also called Red-white Mountain as one side of this mountain is red and another is white. Ancient writings on the wllas of the cave inside this mountain were remained till present days. Hotan is also known by carpet weaving, as carpets from Hotan are considered as one of the best carpets all over the world. There is a small factory in the city where local women weave carpets by hands.

Speaking about the sites of Hotan it is important to note that it is cradle of Buddhism in China. More than 3 000 years ago the first Buddhist monks came to this territory and brought knowledge of Buddhist Sutra. Their mummified remains are still found in archeological diggings on Kunlun Mountain. The relics of the monks are exhibited in Hotan Museum of culture, which was opened in 1995. There are also exhibited evidences of Xinjiang culture: manuscripts, sculptures of Buddha, ceramics and crafts made of jade.

In spite of that nephritis and China are synonyms this decorative stone wasn’t mined in China. For the first time ever discovered in sedimentary rocks of the rivers of Xinjiang –Uygur Autonomous region. Its color (usually it is green) depends from concentration of metals oxides which are included in its structure. It is possible to distinguish nephritis from jadeite by touch because of oiliness.

The surface of jadeite is very smooth and it contains plenty of admixtures, because of which it can be white, apple-green and blue. Mostly it may be found in Myanmar (Burma). Nephritis which is met in Hong-Kong is cheaper and it’s rich by calcium fluorite.

Hotan Museum is placed in the center of the city. There are demonstrated more than 400 cultural relics. Exhibits include color ceramics, ancient coins, silk and woolen cloths, documents on wood cuttings, wooden sculptures for the last 2 000 years. Hotan museum was opened in 2005 and its total square is 4,066 sq. m. It also contains 10 thousand cultural monuments and more than 600 ancient documents.

Exhibition hall on the ground floor shows ancient civilization of the city and colored wooden coffins. The exhibition hall on the first floor includes the exhibits of Uygur customs and traditions. Visitors get know about jade production, carpet weaving, dresses, ancient monuments and tombs.

Every Sunday people from 3 counties: Hotan, Lop and Karakash on carts or on bicycles come to this bazaar to buy any needed goods. There is great opportunity to see local coloring: crowds of customers and sellers are walking everywhere. One can also see how the masters make jade goods under open air. Here you can buy products made of jade and silk, carpets, different kinds of wines, knives, handmade wooden goods, headdresses – hats, caps etc. 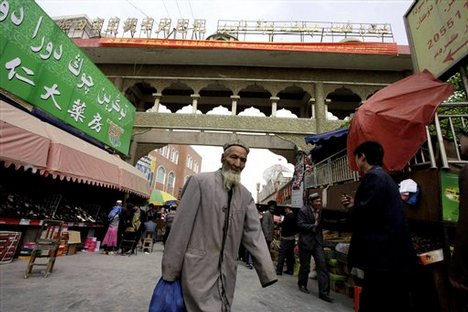 The bazaar is located on the north-eastern edge of the city not far away from railway station. There is also road of state value 315 near the bazaar.

The most popular carpets of Xinjiang are Hotan carpets. These carpets are manufactured in Hotan Carpet factory. Carpet factory was constructed in 1950. 300 people are engaged in this factory (250 workers and 50 employees; 150 workers are engaged on summer period). For each carpet making are engaged about 2-8 workers, cause it depends from the width of the carpet. The factory produces carpets for cities and provinces of China as well as for foreign countries like USA, Austria, Germany, Great Britain, France, Japan etc.

Weaver’s looms are about 2-3 meters high and they are placed in each sewing workshop of the factory. Uygur craftswomen sort colored woolen and silk threads sitting on the small stools over the large wooden weaver’s looms and creating the artwork. Most of production goes to other countries, decorating and making houses cozy on different continents. The demand on these wonderful fluffy handiworks is large in China.