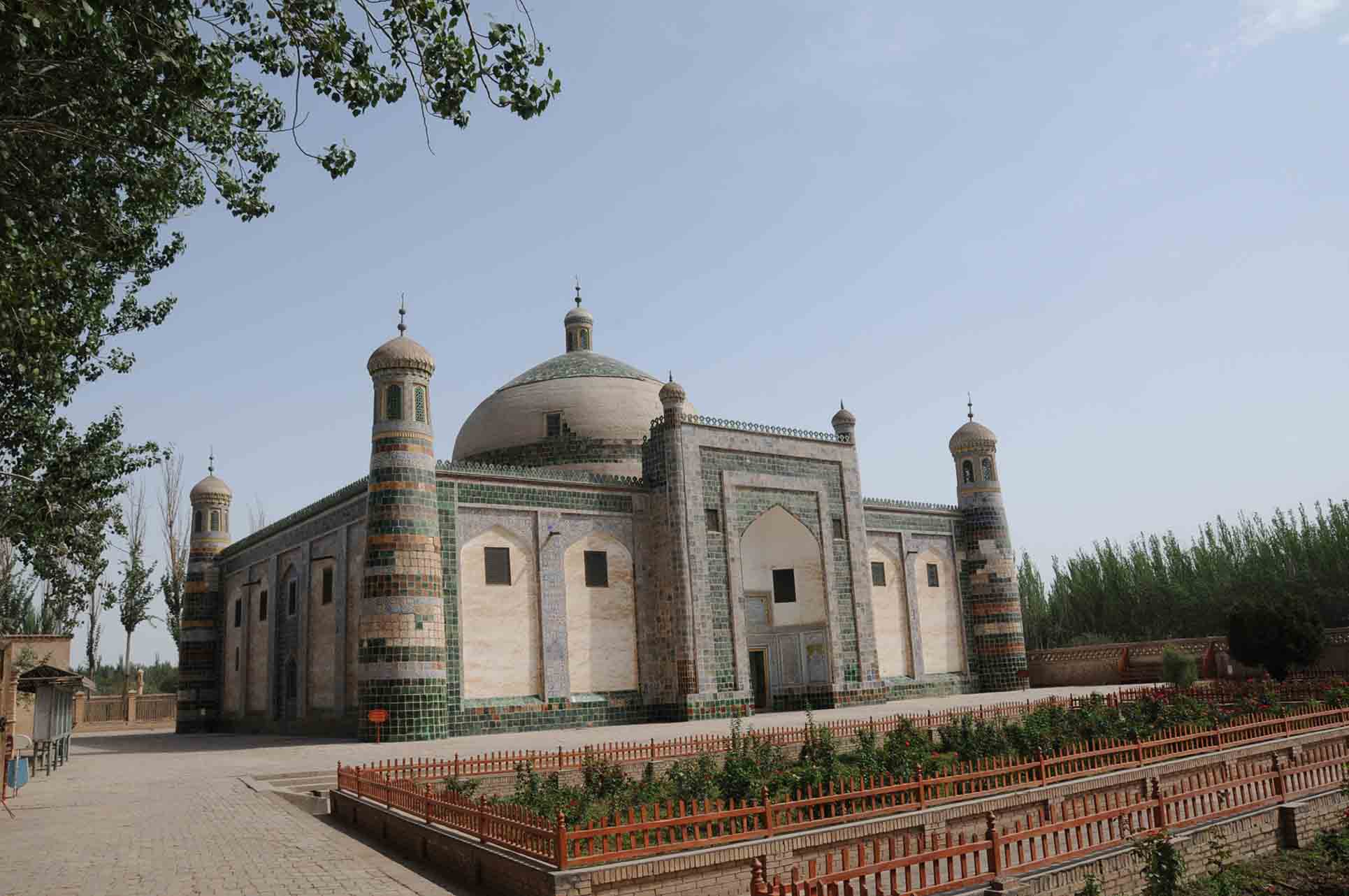 Kashgar is the city, which is standing alone among deserts and mountains, remote from large settlements and far from the sea. In ancient times it was the famous center of trading around the whole world

Kashgar always was well-known trade center, where West with East met together; it was the city, where northern, southern and central routes of the Great Silk Road intersected. In fact Kashgar represented a large market standing on the crossroad of civilizations where gathered all traders from every part of the world in order to sell or buy various goods. For the two millenniums almost nothing has changed, because it is still didn’t lose its economic value and confirmation of this is grandiose Sunday Bazaar (Ekshenba). Market square is divided into 2 sections: one is open every day and represents ordinary market, the second section works on. 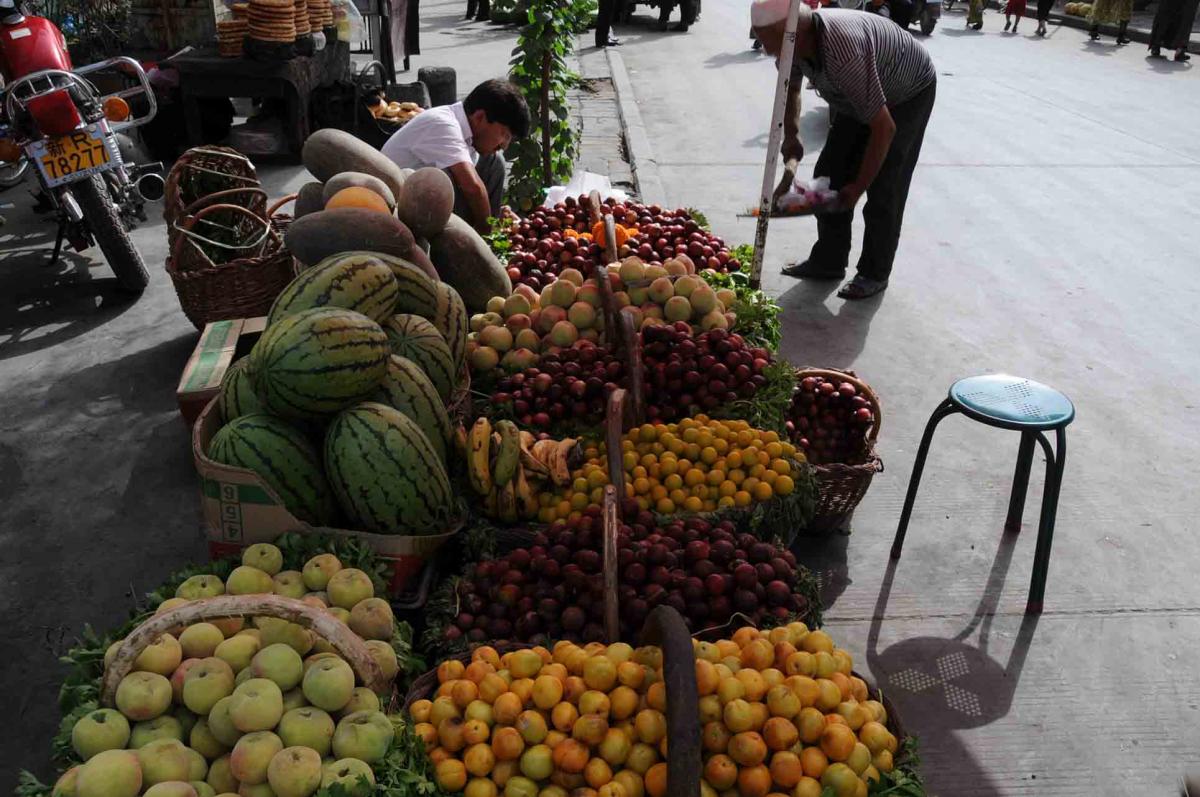 Sundays only and exactly this second part is a main sight of Kashgar. Hundreds of thousands peasants and nomads come here on their donkey carts and pedicabs from close surroundings. Some traders come here from neighboring countries – Afghanistan and Pakistan. This motley crowd in their national clothes represents indescribable spectacle; variety of goods impresses the imagination. It seems that you found yourself in the medieval bazaar: traders show the teeth of their horses and praise their cows or chicken; near people sell handmade tools, hand-woven clothes and sharp knives, carpets, pans, leather goods, Turkish tea-pots, Iranian saffron, etc. Handmade Uygur hats with colored embroidery and cashmere shawls. Jade and silver jewelers may be bought on very cheap prices if you would bravely trade with customers. One can taste dishes of different national minorities.

The ancient narrow streets are leading to spacious square Id Kakh (tr-n “festive”) on which there is towering Etigart mosque – the center of the old city. The biggest mosque was constructed in China in 1442 by order of Kashgar ruler Shakesymyrdza on the place of former Muslims graveyard in order to let believers contact with souls of dead relatives. Last time the mosque was reconstructed during its existing after Cultural Revolution and it remained its initial appearance. The central gates which are 12 meters in height and 2 minarets covered with small yellow tile what gives a nice view to complex; they are visible from the side of the square. 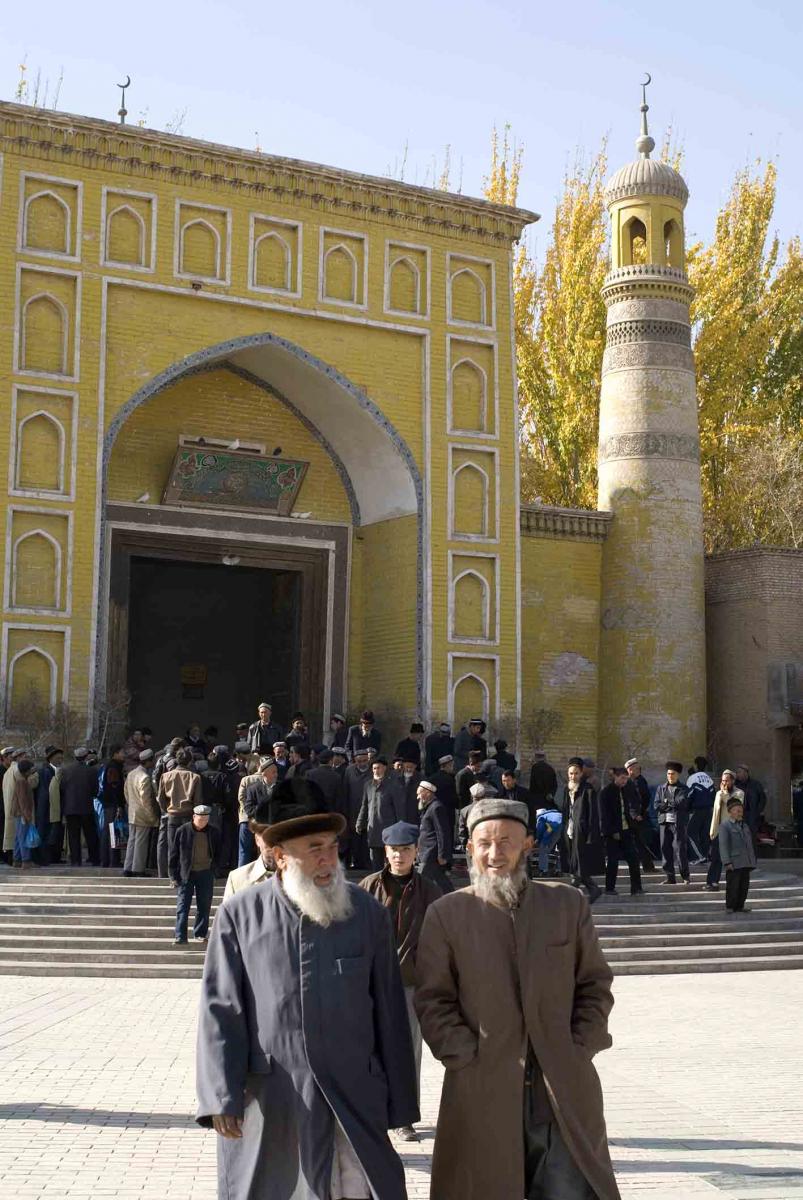 The minarets, from where muezzin calls Muslims for prayer, are crowned with crescent.Chinese architecture didn't influence on Etigart mosque: the appearance of the complex reminds traditional Middle East mosques. So there are only few mosques in China which are similar to Etigart mosque. There is placed spacious yard: lush crown of old poplars and pines give this place thick shadow, therefore it is always cool and convenient here. Visitors have a great opportunity to see such a large number of ceramic vessels around the pound in the yard, which they use for ritual ablution before prayers. Among 36 halls of this mosque the main prayer hall deserves special attention. Thousands of religious people come here for prayer.

Old blocks of Kashagar city has an indescribable charm of middle ages: narrow winding streets, randomly built ancient low houses made of bricks and clay, numerous squares, where the whole bazaar fits on the large space – it seems that the time machine brought this city from far past. Barefoot kids are running on lanes; women who are famous by their beauty around China hide their faces behind the veil. Kashgar used to be the most important city on the Great Silk Road, and locals didn’t lose their ability to conduct a brisk trade: shops, stores, restaurants and craft workshops which can be found in quite unexpected places in labyrinth of crooked streets. Uygurs offer their goods with such mastery that you couldn’t help buying anything from them.

These narrow streets lead to spacious Id-Kakh square, the biggest mosque of China Etigart. The clock tower is placed on this square. If you return to labyrinth of streets and go to southern destination, you will find the fragments of ancient clay fortress wall of old city. There are a lot of various hostels far away from this place. Hostels are placed in former buildings of embassies – British (“Qinniak” hotel) and Russian (“Seman” hotel).

As for 2 000 years Kashgar was the crossroad of the Great Silk Road and was important trade center, a lot of traders with caravans came here in order to sell, buy and change, therefore trade is the main activity in Kashgar. It is easy to sure in that, if you go through the streets of the city, you will see that every part of the street is occupied by stores. The main street is the Artists’ street which stretches until the Id-Kakh square. The narrow street of 1 km length contains more than hundred old workshops and stores, where Uygurs in traditional clothes sell various handicrafts, made on the place as a rule. 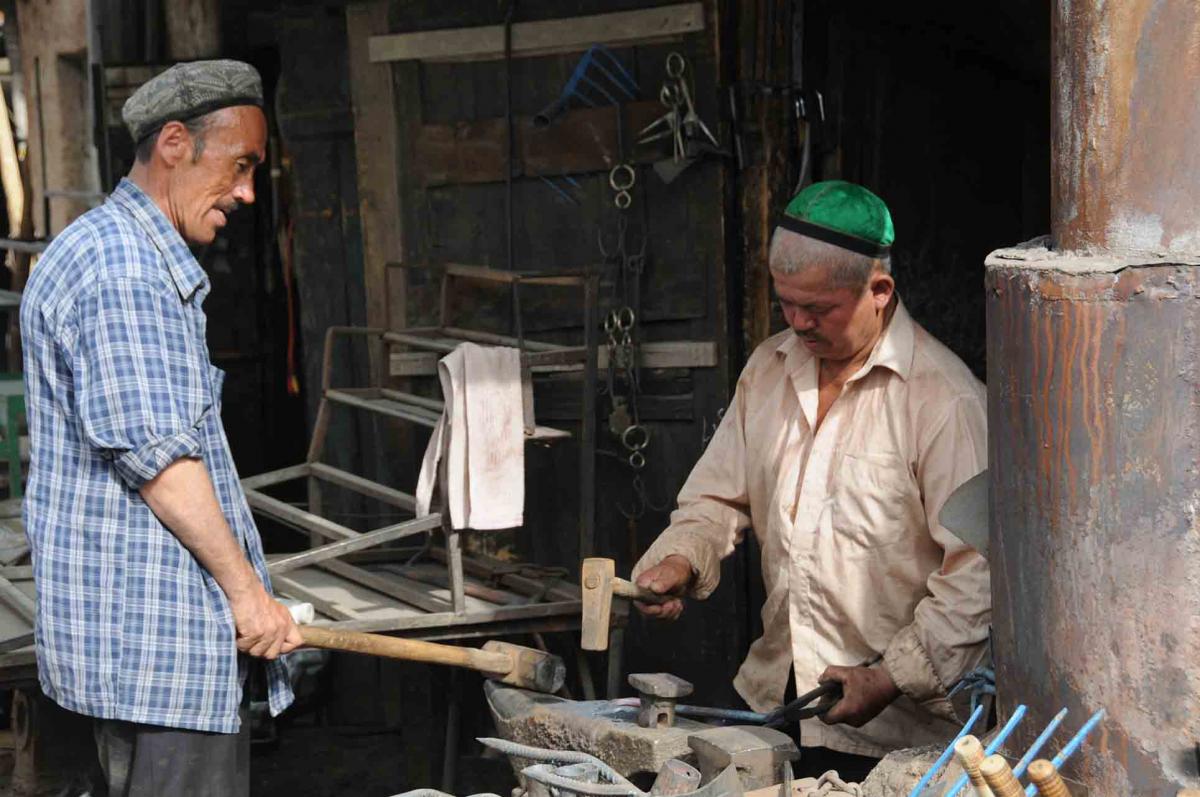 Earlier these shops were working only for local population, however nowadays tourists are interested in that, so you should pay your attention to the quality, when you buy things. Plenty of people are crowded on this lively street: women, whose faces are hidden behind the shawls, beautiful girls, men, travelers, etc. The whole street is like a kaleidoscope of colored goods, bright clothes and unique faces. The most attractive goods among others are silk carpets, which can decorate any house. Local women go there in order to buy Uygur headdresses with golden embroidery or ceramic tableware. It is possible to buy here different forged products, handmade knives, national jewelry, wooden goods with fine carving, copper tea-pots and other handmade products.

The legend about Uygur Princess Xiangfei (what means “fragrant concubine”), the princess of Qin dynasty, who took herself own life in the end of the18th century, tells that Apakh Khodja Tomb was the place where she was intered; it is also known as the bierdf; of princess Xiangfei . This tomb is one of the most significant shrines of Kashgar, which is spaced 5 km away from the city center. Beside Xiangfei and her grandfather Abakh Khodja here were buried 70 people – 5 generations of the local rulers’ family. 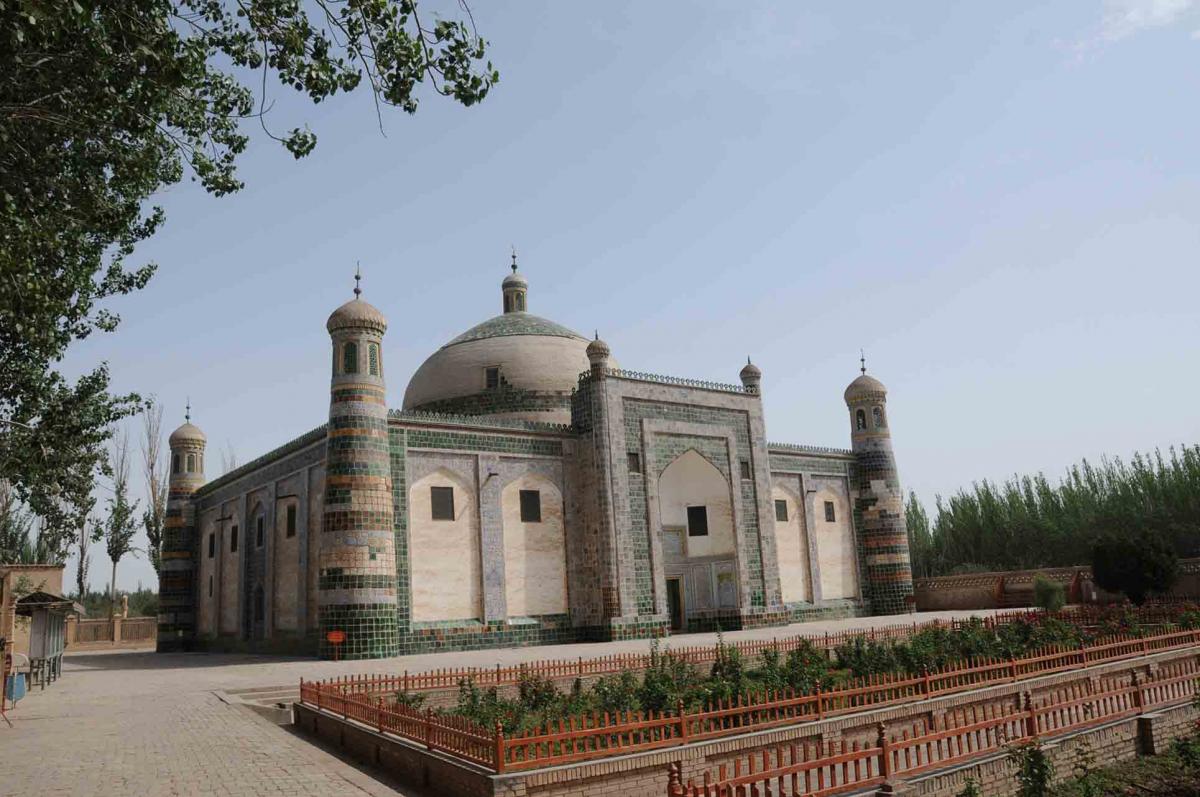 This tomb is constructed in traditional Uygur style of architecture. The square of this building is 20 000 sq. m. The mausoleum is claded with green tile, decorated with complicated ornament. The main gateway opens to the south; a big pavilion is situated near it; in this pavilion placed mosque and the main tomb. Men's and women's graves are covered with variegated cloth. There is mosque with a big prayer hall located in the area of the complex, arched gates, fruit gardens, etc.

Mor Pagoda is placed approx. thirty kilometers away to the north-east from Kashgar city and it represents ancient Buddhist ruins. This construction was built in the time of Tan dynasty ruling and it has thousand year history. Pagoda consists of oval ground tower and terrace. Oval tower is twelve meters high and  inside it is empty. There is a large high terrace near the tower - this is a main building related to Buddha. 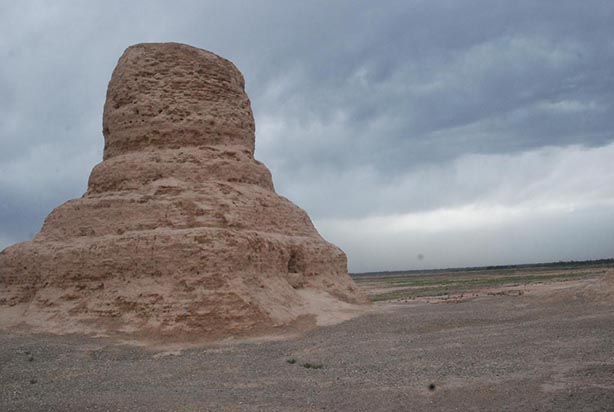 There two pagodas in Mor Pagoda remained from ancient times: the ruins of monks’ houses and underground channels in 1 km length (the place, from where monks took the water). At the bottom of the  ancient temple ruins there is a burnt tree, therefore they say that temple was destroyed by fire.

Makhmud Kashgary was the prominent Uygur scientist, the descendant of Karakhanid dynasty - a ruling dynasty in Central Asia in the eleventh century. Kashgary was the creator of the great “Dyvan Lugaty at-Turk” (Turk language dictionary). The mausoleum is constructed  on a high hill in traditional Islamic architectural style (about 70 meters high) and it covers the area of 1200 sq. m. 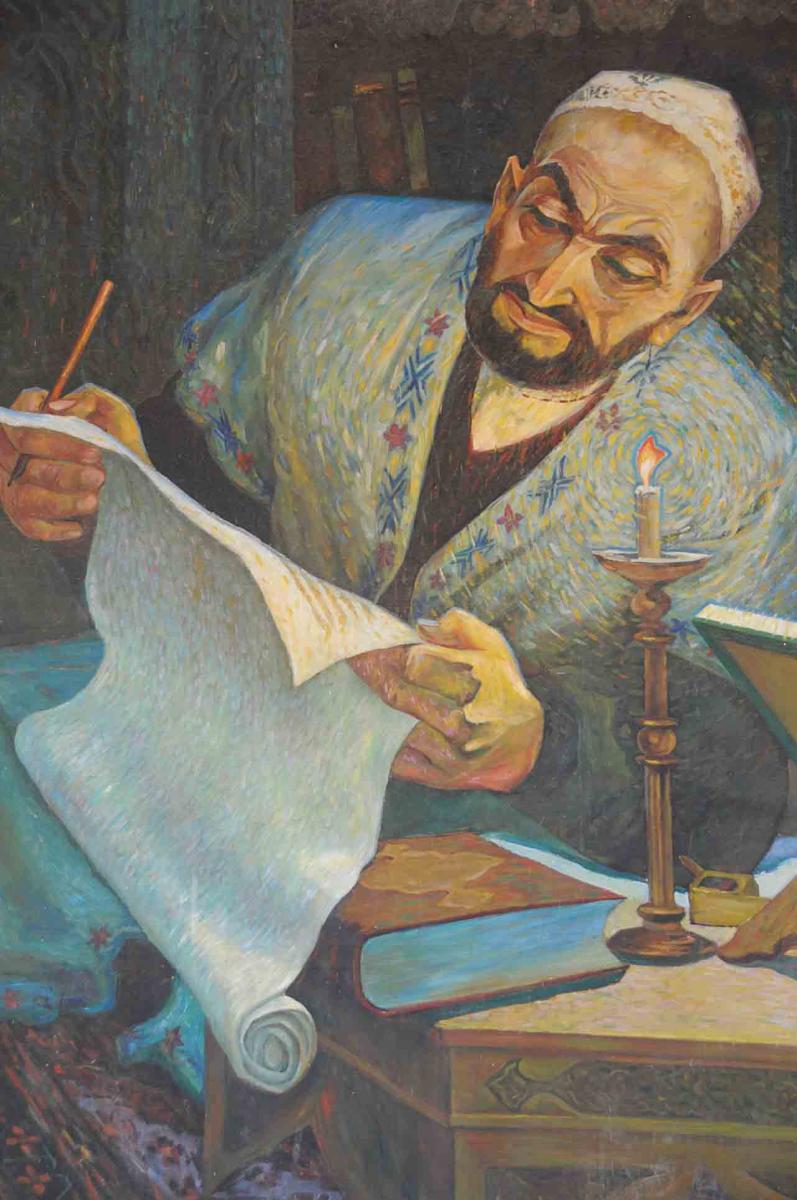 The museum of scientist’s works is placed in northern part of the tomb. There is hanging a huge portrait of Makhmud Kashgary in the main hall of the museum. Different versions of the Turk language dictionary and different chronicles about scientists are exposed in museum. There are a great number of trees and plants around the mausoleum which give a beautiful view to the whole construction. The tombs of Kashgary’s relatives are also positioned over the mausoleum.

Oman Nisha Khan is outstanding poetess of Xinjiang in the 15th century. She is collector and composer of Uygur national classic music “Twelve Muqam”. Oman Nisha Khan Mausoleum occupies the area of 1050 sq. km. It consists of royal palace Aletun and a mosque. The mausoleum is twenty two meters in height; the length and the width are ten meters both.

The name of the music “Twelve Muqam” is engraved on the walls of the tomb-palace. The mausoleum is built in national Islamic architectural style.

Karakuly Lake is a real pearl encircled by mountains and deserts. It is placed 200 km away from Kashgar city, 3652 meters above the sea level and it lies at the foothill of Pamir Mountains, which snowy peaks reflect in azure water. There are three highest peaks which stand out among others: Muztagata (7546 m). “The father of Ice Mountains”), Kongur (7719 m) and Kongurtube (7595 m), which as three warriors guard this priceless pearl. 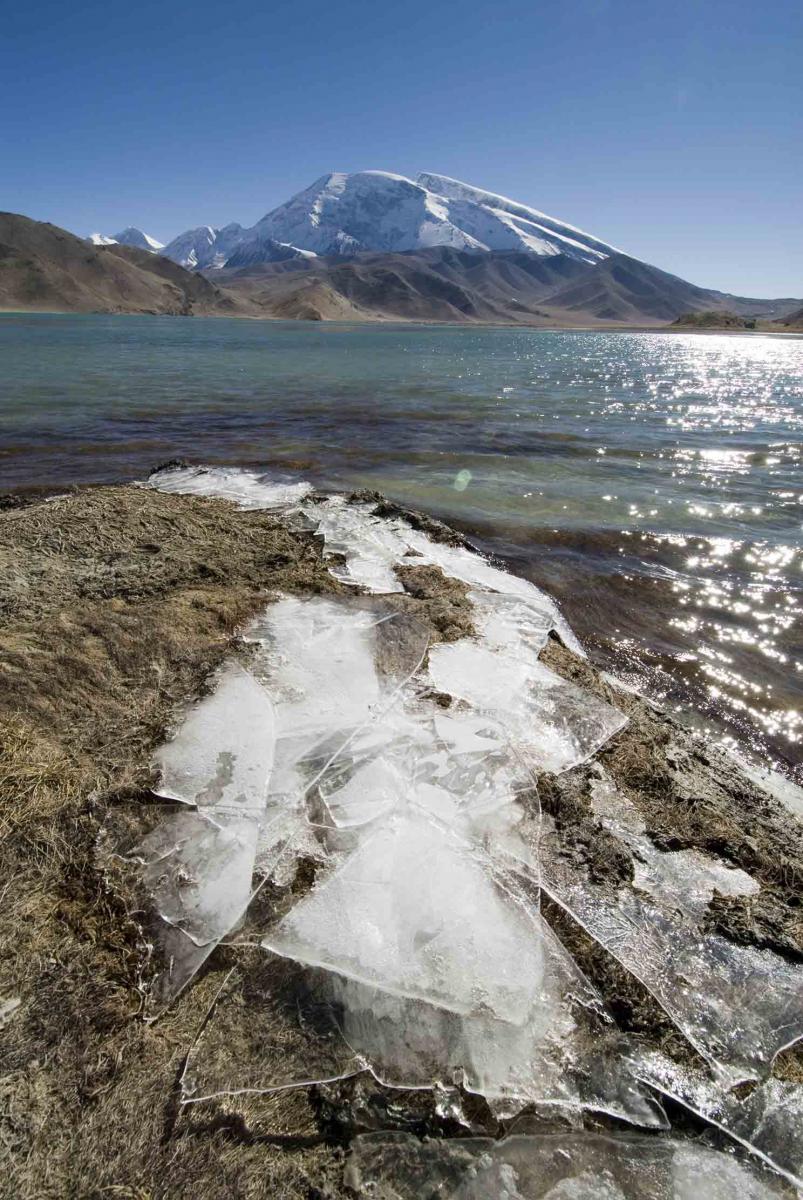 There are small grasslands around this lake where Kyrgyz people live in yurts and ranch. The water of the lake is clear and cold all seasons; usually locals use it for drinking, therefore the swimming in this lake is not allowed. Here you can spend a night in local yurts and have hiking. Visitors of the lake should better put on warm clothes in night time, because it is cold in summer time too.

Opal village is the place located 28 miles to the west from Kashgar. Opal is the rich agricultural oasis, where the tomb of prominent and famous Uygur philologist of 11th century Makhmud Kashgari. Makhmud Kashgari, renowned scholar of Turkish culture in western Xinjiang and other parts of Central Asia, compiled a widely acclaimed Turkic dictionary in Arabic.

The present mausoleum of Opal’s native son was rebuilt in 1983, and several rooms are devoted to an exhibition of his works and local archeological finds, including a large pottery shard showing a bearded foreign king crowned with vine leaves. Several ancient Buddhist caves in complete ruin are situated in the bluff behind the tomb. The travelers have great opportunity to visit local market of Opal village. This market is smaller than market in Kashgar because of equally authentic atmosphere, in spite of it is less chaotic.