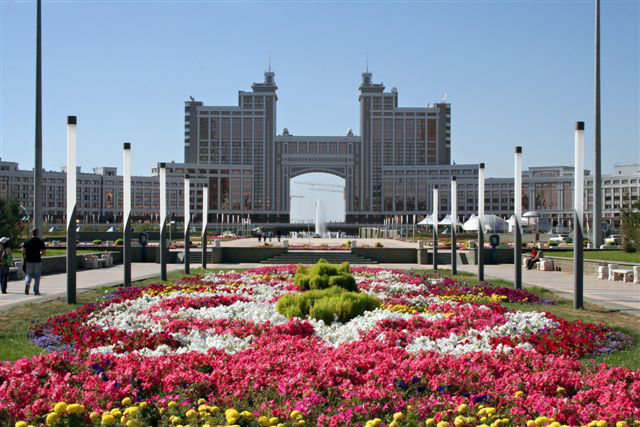 Almaty has the most vibrant cultural life in Kazakhstan.A plethora of theatres, the opera, galleries, and antiquity concert halls all combine to create a city with something for every taste.

This melange is located next to the Kazakhstan hotel and detain from the intersection of Abai and Dostyk avenues. There, at the foot of the televisions tower, you can watch out over gorgeous mountains and the city, a glorious panorama that draws hundreds of people at a time in the evenings. Sunset is a particularly popular time, enjoyed with a portion of shashlyk, wine and national music.

Panfilov Park was named after General Ivan Panfilov’s regiment.The large park, with its old trees and peaceful ambience, is frequented by countless people every day. Some seek spiritual help or a blessing in the Holy Ascension Cathedral, Zenkov’s wooden creation that is an architectural joy; others simply come to bear witness to Almaty’s past, to take a coach or horse ride. In addition, in this park, tourist could witness the traditional rituals of bride’s kidnapping.

Bridal couples surrounded by their numerous guest and relatives visit the park and lay a garland on the monument to the guardsmen, before proceeding to the Wedding Palace for the ceremony, then to Medeu to celebrate their wedding day in great revelry.

Another spot where one is sure to meet many people is Republic Square, where the impressive Independence Monument looks across to the old Presidential Palace. Situated between Furmanova and Zheltoksan Street. The great advice will be to come on Kazakh traditional holidays. On these days, the square is turned into a place of festivity with stages, market stalls and great fireworks with music and dances.

The Central Mosque on the corner of Raimbeka and Pushkina, with its large blue domes can be spotted from some distance. It is relatively new, built in 1999, and can accommodate 3000 worshippers. The building’s outer walls are made of white marble, while the inside is an attractive blend of modern Islamic architecture. It’s good to know, that on Fridays the Kazakhstan people are celebrating the Day of Prayer in Central Mosque. The Hall of Prayer and its adjacent rooms quickly fill with praying men, on the occasion of weddings; many less religious Kazakhs come here in order to secure the support of Allah.

The Central State Museum of the Republic of Kazakhstan, a giant building with sky-blue domes constructed in 1985, is a landmark that can easily be spotted from Koktobe Hill. In spite of the fact that many of its best items have been moved to Astana, it still has a lot to offer. An example is Altyn Adam- the Golden Man from the 4th Century BC. One department is dedicated to the Silk Road. Painting, allegories and models of mosques and fortress take the visitor back to the Times of Genghis Khan, The Golden Horde and Tamerlane. Especially impressive are the numerous objects from the daily lives of Kazakhs and their ancestors. Carpets, pictures, felt objects and books are on sale in various souvenir shops in the museum lobby.

Big Almaty Lake, the 38-metre-deep lake, is situated at a height of 2511 metres in the valley of the Greater Almatinka River, to which it owes its name. The water temperature does not rise above 8 C in the summer. The lake is at its most beautiful in June-July after the snow has melted, or in September when the glacier has released its highest level of water during the summer.

The Museum of Folk Musical Instruments situated on the east side of Panfilov Park, is neglected by many tourists but should not be missed. If you are lucky enough to be guided personally by the Kazakh composer and singer, Abylai Tugelbaev, you’ll learn a lot about the history and culture of Kazakhstan, get demonstration of all popular instruments and finally have the privilege to listen a 15-minute concert performed by Tugelbayev, accompanying himself on the dombra