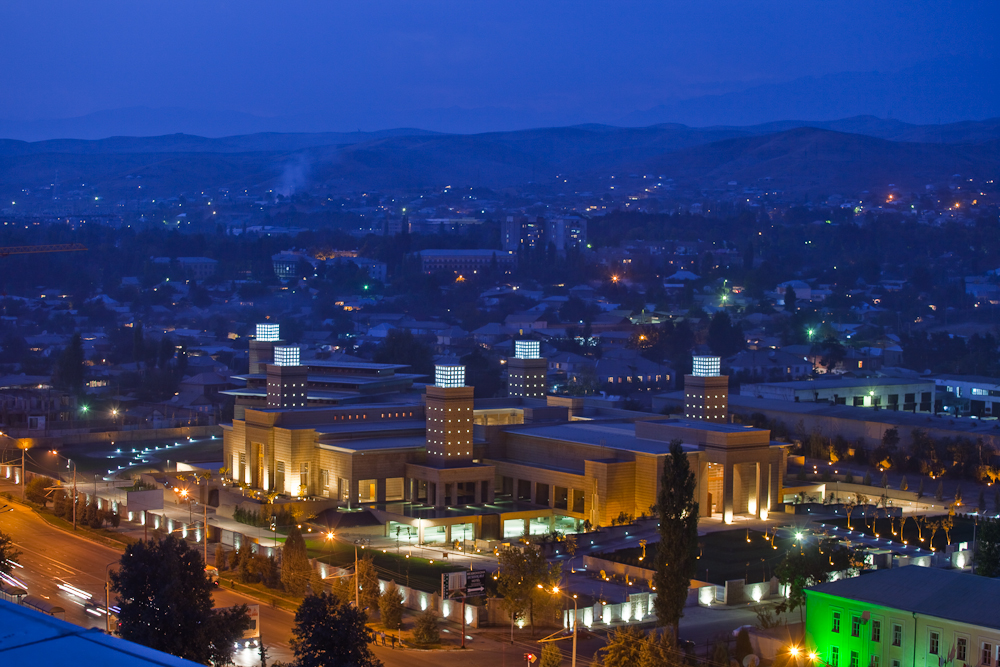 Dushanbe is the largest city and a capital of Tajikistan. The city is placed on South of the country on Dushanbinka river bank. Dushanbe is considered as one of the most highland cities in the world – 900 m above sea level.

This Museum was opened in 2001 and it is departmental museum, which has a national status. The collection of museum is valuable and important at state level. The archaeological materials collected by the Tajik and Russian researchers and foreign scientists. The exhibition is placed in two-storey building and it represents masterpieces and valuable archaeological monuments from excavations, which were made by Academy of sciences in Tajikistan. The most popular and valuable museum exhibit is the statue which is called as “Buddha in nirvana”. There are also exhibited monuments, which were found during excavations in Khudjand, Penjikent, Istaravshan, Kulyab and Khulbuk.

The museum was founded in 1990 on the base of private collection of national artist Gurmindja Zavkibekov. There are more than 200 exhibits from all countries in Asia. The main exhibits are represented with stringed, brass and drum instruments. The collection of stringed instrument is the most numerous. Among the instruments, exhibited in museum, are setaras, dutars, rubabs, tanburs etc. There were also created folk and pop-ethnographic, which are headed by Gurmindj and his son Iqbol Zavkibekov. The museum exists on private donations and because of help from organizations.

Culture, way of life and social system in different stages of history are collected and kept in Museum of Ethnography. The building of the museum was constructed in 1934. The largest collections of Central Asia are kept in the museum. Nowadays there are about 15 thousand of exhibits in the museum. Pottery, carpets, jewelry, musical instruments and clothing from all regions of Tajikistan are exhibited in the museum.

Literary-Memorial Museum in Dushanbe was founded in 1981 in honor of 70-th anniversary of the poet and public figure of Tajikistan Mirzo Tursunzade on initiative of his family and supported by government of the country. Museum is located in the private house of Mirzo Tursunzade in the capital and it is on the balance of Academy of Sciences. The works of poet, which describe cultural life in Dushanbe in the middle of 20th century, and conditions of his life are preserved in the museum. The exposition represents the life and creative work of Mirzo Tursunzade, his versatile activity on peace consolidation in a separate room. The important part of the exhibition is library and private archive, which consists of more than 4000 books.

Architectural-Sculptural Memorial complex was constructed in 1975 on the project of authoring team of Dushanbegiprogor institute (architects B. Zukhurdinov, V. Sherdinin, sculptor D. Ryabichev). Main entrance of forest Park and memorial is placed from the side of the “Friendship of peoples” street. Opening of Victory Park in Dushanbe was timed to 40th anniversary of victory in Great Patriotic War 1941-1945. On the project there were built a square of tribulation with eternal fire and alley of heroes with high relief and sculpture of Mother. At the foot of the stairs in the center is placed the polished granite slab with inscriptions in honor of soldiers — heroes of the Soviet Union. However, the cascade of pools and monument of the Motherland were not realized. Victory Park is one of the favorite places of residents. Military parades are usually on holidays, especially the "Victory Day", on the upper terrace.

The main street of the capital is – Rudaki Avenue. It stretched from south to north of the city for 12 km in parallel with Dushanbinka River. The house of government, Tajikistan Academy of sciences, University, theatres and museums of the capital are situated on this avenue. One of the best buildings of the country “Tajikistan” hotel, which is decorated with metal chasing, wood carving and gypsum and it is also located here. The monument of Rudaki – the founder of Tajik-Persian literature, who lived in 860-941, was placed on the square.