Christianity on the Silk Road

Christianity on the Silk Road 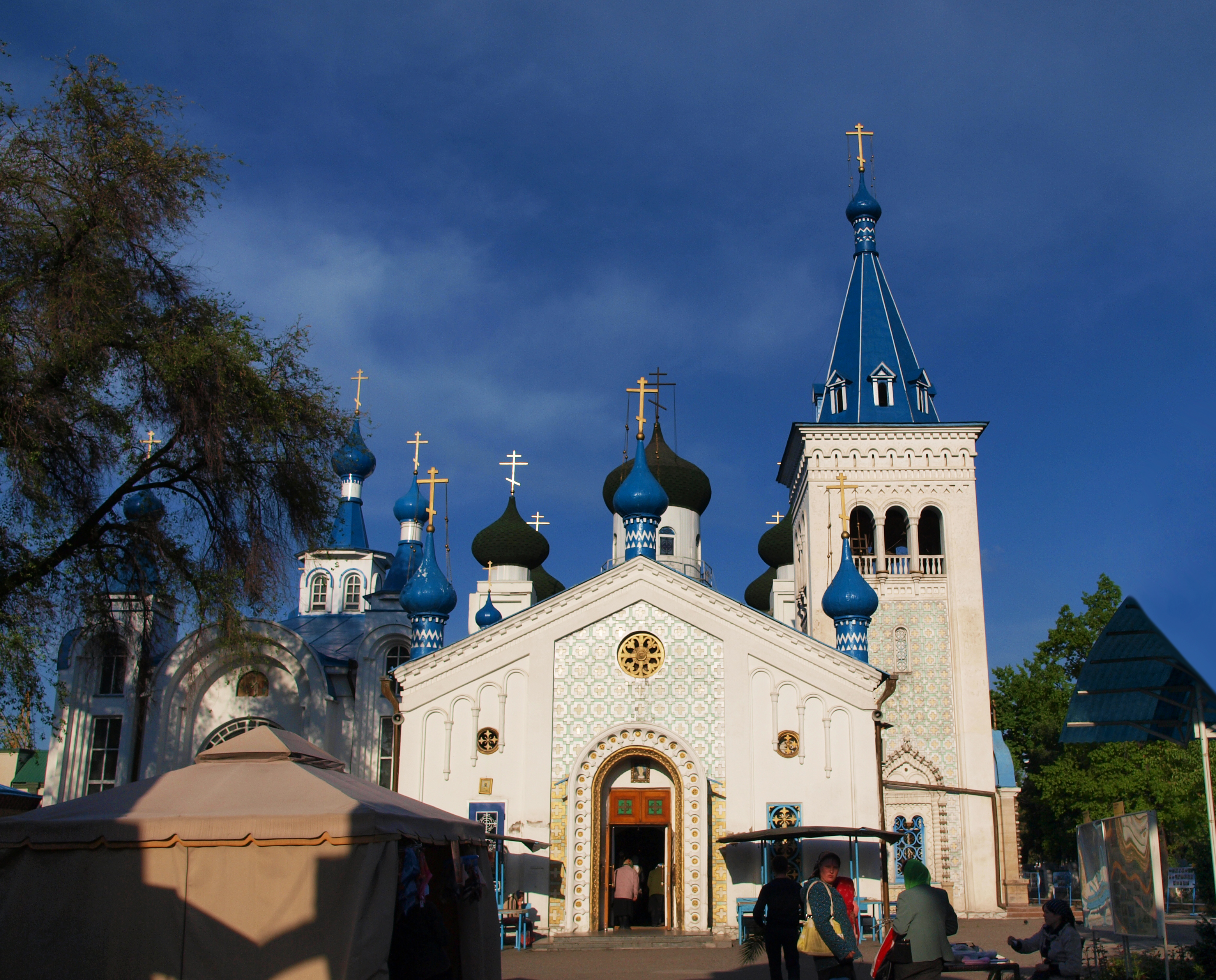 Traveling along this tour you will have the unique opportunity to visit significant sites of Christianity on the territory of Uzbekistan and Kyrgyzstan. The construction of churches and cathedrals for the needs of Polish, Russian, German, Lithuanian and Armenian settlers began in the late 19th century and early 20th century. Today, Christian churches of different denominations - Roman Catholic, Russian Orthodox, Lutheran, and others are all registered with the State and are actively involved in their pastoral activity. These historic churches and cathedrals along with the new ones have helped the followers of Christian faith to be close to their spiritual roots, cultural and religious traditions, create new friendships and find new followers on the hospitable land.

Visit Russian Orthodox Church - is the main group of Eastern Orthodoxy in Uzbekistan in Tashkent, which is 140 years old and was built soon after the annexation of the Central Asian provinces with Russian empire. Today it turned into the most beautiful Cathedral of Holy Dormition – the main church of Tashkent eparch. The majority of believers come exactly here. This cathedral is the oldest in Central Asia. Uzbekistan falls within the area of Tashkent and Central Asian Eparchy, which is headed by an archbishop.

It has been established in 1871 and extends to Tajikistan, Turkmenistan and Kyrgyzstan.

The Catholic confession is not so numerous in Uzbekistan. But the church (kostel) of Sacred Heart of Jesus Christ has been existing in Tashkent almost for a century, which is also the beautiful sightseeing of the city. The history of kostel begins in 1912, when its construction was started. The underlying reason of it was the necessity. As far back as in the end of XIX century, during the military campaign of the General Kaufman on joining Asian lands to Russia, our area was settled by big amount of military and exiled people, which included Germans, Lithuanians, Poles, Czechs and others. Having desire to have its own Catholic parish, they applied to the government on establishment of their confessional church and acquired the permission of its construction. But the fortune played a nasty trick on believers: the church was not built in short period, then the construction was stopped at the failure of assets. By that time the Soviet government established on the whole territory of the union, the church in the lack of need was turned into the storehouse, and later into dormitory. And only in 1992 the building of kostel was handed over to catholic parish of Tashkent. And present time Sunday Masses are conducted there

Morning you are transferred to Tashkent Airport to board flight for Urgench.

Khiva is the museum under the open sky.

In the inner city Ichan Kala no transport, whole day will be just walking tour:

Later continue to Bukhara. Upon arrival in Bukhara check in at your pre booked Hotel

Evening panoramic sightseeing tour in the historical part of the city.

Visiting Lab-i-khauz ensemble, the pool and chaikhana of which is the modern centre of traditional Uzbekistan. A place where the very soul of Central Asia lies mirrored in a piala of steaming green tea. Visit Madrassah Nadirkhon Devanbegi, Khanaga, Mogaki Attari mosque, Poi Kalon minaret and mosque.

Then proceed with sightseeing of the churches:

The Church of Archangel Michael representing a converted building of the railway station dating back to 1904;

The new St. Andrew the Apostle Church, registered with the state in 2002 but constructed in 2005. Nowadays the church is able to accommodate 150 people.

Today excursion to Sitora-i-Mokhikhosa, the summer residence of the former emir of Bukhara

where you can see unique mixture of traditional Russian style of architecture harmoniously mixed with local oriental traditions.

On arrival transfer to your pre booked hotel.

Half day sightseeing tour in Samarkand:

Then proceed with sightseeing tour of churches:

Church of Intercession of the Virgin which was constructed in 1902 according to the project designed by the Russian engineer I. Lebedev;

St. Georgiy the Victorious Temple, constructed in 1882 according to the project designed by the Russian architect from Samarkand, Vladimir Lepke;

St Alexey Cathedral dedicated to the Saint Alexis (Metropolitan of all Russia). Its project was designed by the architect from St-Petersburg F. Smirnov in 1905;

Later excursion to Mausoleum of the Prophet Daniil. The Biblical Prophet Daniil, known in the East as Hoja Daniyar, lived in 4—5th century BC. He was a descendant of Solomon tsar, revered by the three world religion. It is considered that parts of Daniil remains, namely a hand, were conveyed to Samarkand by Temur.

Visit excavations and museum of the ancient city of Afrosiab and Ulugbek’s observatory located in the entrance to Samarkand. Among historical monuments of Samarkand observatory takes particular place, constructed by Ulugbek (Grand son of the Great Amir Temur) in 1428-1429.

Morning at leisure and transfer to railway station for train to Tashkent.

On arrival half day sightseeing tour visiting new part of the city:

Early in the morning transfer to Tashkent Airport to board flight for Bishkek. Upon arrival in

Visit The Cathedral Church of the Holy Resurrection was based in 50-ies of the 20 century. Holy Resurrection Cathedral is the second largest Orthodox Church in Bishkek after the closed St. Nicholas Church. External and internal appearance of the building is very rich and festive.

The amazing story of the Resurrection Cathedral said that while the restructuring the current church services were held outdoors. Reconstruction was carried out by the architect Veryuzhskiy. It is also known that before the restructuring of the building into the temple, the Soviet government planned to create there a club or a theater.

Resurrection Church has a rich history of the restructuring - a few times they changed the layout of the area, rebuilt the building itself, but ultimately Resurrection Cathedral is one of the most beautiful places in Bishkek. One of the attractions of this cathedral is a hipped bell tower 29.5 meters, in which ministers are calling in the days of service. Temple continues to grow - now there's an excellent library, classes, Sunday school, conference room and even the newspaper "Orthodox world."

Later drive to Cholpon Ata, on the northern bank of Yssyk-Kul (hot lake), the second biggest mountain lake in the world after the Titicaca Lake., situated 1600 meters above the sea level. Rest on the lakeshore in a unique combination between mountainous and marine climate. Visit of the petroglyphe's field from Cholpon-Ata and the Burana tower on the way. Burana tower is situated in the centre of ancient town – Balasagun. The tower is 24, 6 metres high (original height was 45 metres).

Morning leave by surface for Karakol.

The Cathedral church of St. Nicolas the Miracle-Worker is situated in the village Ananyevo on the northern shore of the Issyk-Kul Lake, 50 km east of Cholpon Ata. The Church was based in the end of the 19 century. During the Soviet times all kind of religions were banned and almost all the churches were destroyed. The small, charming Cathedral church of St. Nicolas the Miracle-Worker survived and is worth a visit.

Enrooted visit of the Prejvalsky Museum located 12km from Karakol. It is situated just on the shore of the great lake. It was built to commemorate

the famous Russian traveler and scientist Nikolai Prezhevalski, who dedicated 21 years of his life to the investigation of the Issik-Kul valley and the mountains surrounding the region. He died not far from the place where the museum and the memorial to his honor were built.

Upon arrival to Karakol visit the Russian Orthodox Cathedral. This pretty little church is one of the most amazing buildings in Karakol, mostly built of wood, and inside decorated with Icons, pictures and wall paintings. The next place – Dungan Mosque - beautiful and unusual for local architecture building of the mosque is interesting. Old aged building of the mosque was built in Chinese style by Dungans and made of wood. It was built without a single nail.

In the morning drive for full day excursion to Jety-Oguz gorge. The Alpine health resort Djety-Oguz lies near the river at the altitude of 2200 m.Situated in a picturesque canyon on the Northern slope of the Terskey Ala-Too range about 25 km South West of Karakol. It is a lovely place for one day walk and at the same time for many day treks, starting from easy form and up to the hardest. It is the place where you can see the real life of Kyrgyz people and walk along the gorge, visit nomad’s yurt. In the late afternoon return to Karakol.

In the morning drive to Bishkek via the southern shores of Lake Issyk-Kul. The road hugs

the water’s edge and winds through remote Kyrgyz villages, against a spectacular backdrop

of the Central Tien Shan Mountains. Upon arrival in Bishkek check in at your pre booked Hotel

End of the tour 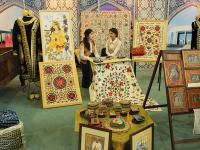 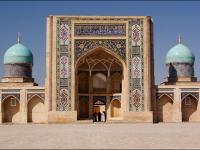 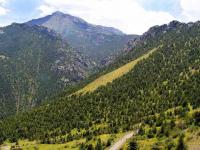 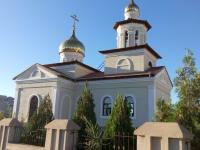